Bhima - The man in the shadows – Book Review

This is Mahabharata told in the view of Bhima , the second pandava. The story begins in the battle field where Bhima is about to kill Duchadhana. He is begging him to leave him , as Bhima had already killed 98 brothers of him.
Bhima kills him and takes his blood to Draupati and apply it on her hair and decorate it with his heart.

Then comes his childhood where they were staying in the forest and one day bhima was lost in the forest and he meets his real father Vaayudeva.
When he returns back to the ashram , he finds pandu – his known father was dead.
The swampara of Draupati was the next scene , Arjuna won and as per their mother Kunti’s saying all of them marries her.
At the first sight itself Bhima falls for her but she was in love with Arjuna.
Even though he was envious towards arjuna , he likes his brother and supports him in every action.

When arjun marries subhatra , draupati was heart broken , Bhima was in her side and helps her in cooking and he was a great cook.

When their new city indraprastha was build by a MAYAN , they decided to do a yagam and invited the kings of many nations. This included their cousins gauravas.

When duryodhana accidently falls into the pool mistaking it as the marble floor. Draupati who was standing on the balcony laughed and said like his father duryodhana was blind.

Bhima didn’t know that this smile of draupadhi will bring a huge war and the destruction of their cousins and he sons of pandavas.

As the story of Mahabharata was known to all , but  reading in the view of bhima and knowing his feeling  in each and every scene is good.

You can order the book here or in any online stores.
Thank you Westland Publishers for sending the book….

Posted by Sharanya palanisshami at 8:29 PM No comments:

The Bestseller She wrote - Book Review 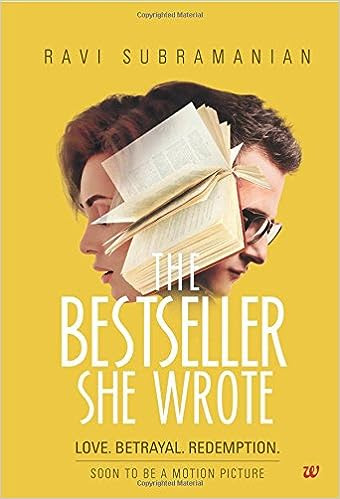 About The Author :
Ravi Subramanian is India’s number one thriller writer, having written six bestselling books. An alumnus of Indian Institute of Management (Bangalore), he is currently head of a leading financial institution. A career banker and financial services professional, Ravi has worked with various multinational banks (Citibank, ANZ Grindlays Bank and HSBC) for over eighteen years. As a result of his extensive background in foreign banks, writing about banking comes quite naturally to Ravi. Each one of his books thus far have been set in the backdrop of a foreign bank.


Subramanian is now the CEO of a listed NBFC. Subramanian continues to write popular columns for well-known magazines and has his own personal weekly column in the Career and Business life page of The Economic Times.

Story Plot :
The book starts with the gathering of students of IIM- Bangalore for the speech of the one of the alumini- Arjun Kapoor , famous banker and has written famous books so far.
While he was talking , he mentioned his book as product and how to sell it. One girl from the gathering stand up and said he must not mention it as product.

The girls name was revealed as Shreya Kaushik in the next chapter. She stays in the hostel , her parents separated when she was young.

Maya , wife of Arjun Kapoor  was also a alumini of IIM, theirs was a love marriage. Maya got job in Singapore and they relocated there. They have a son Aryan. After their son’s birth she quit the job and was currently working as a teacher in Ambani’s school.

Arjun was working at the National bank, he got this job through sanjay Narang, the head of human resource , who was a classmate of arjun in IIM and both were friends since then.

Sanjay called Arjun and asked whether he is interested in joining the Interviewing panel  as being a HR , he is going to IIM , Bangalore.

Arjun said it will be boring and after checking his mail , he was having a book reading event a day before the interview session , he said ok.

In the book reading event, a girl waited till the last to get his signature . He signed as I won’t forget you shreya and November 22 . He even gave her a ride to her hostel as she can’t find autoricshaw.
On the day of interview , he selected shreya’s  resume along with some others and he insisted sanjay to select her.

She joined the bank one month before others and was placed in Arjun’s team. Sanjay  noted  his interest in her and he even asked Arjun about and warned him that he has a family to look over……..

Shreya asked Arjun’s help in publishing her first book as her manuscript was rejected by a publisher.

When he told her that he was writing his fifth book , she asked that to read before publishing. Usually he gives it to read for Maya , he gave that to shreya when Maya went on a school trip to NASA.
Arjun called Vaishali Mathur of Kiwi Books , to publish shreya’s book and he send the manuscript to her as well as few of the publishers…….

After few days , vaishali called him and said that she already received the story but with slight variations. She added that the story he send has the main character name as Arjun and he has wife and a son. The female lead will marry him at the end as his wife dies. She also asked how the writer knows more about the naxalites.

Arjun didn’t consider any thing , but he insisted her to work on to publish the work……

Arjun’s fifth book was about to publish under kiwi books. For the party he invited shreya too. Sanjay came to him asked if maya knows about them…….
In the party  , Arjun introduced maya , shreya and sunaina , while sunaina extended her hand , but shreya just say hello.

Both maya and shreya dislikes each other at their first encounter. Arjun went introducing shreya to those in the party  ,  maya’s eyes followed shreya as she found something suspicious.
She searched in google about shreya and found a blog post on the arjun and shreya’s discussion on IIM , Bangalore. She then searched on the facebook of TOI and saw the picture of both of them together in the picture of the book reading event in Bangalore . She also remembered that he went to Bangalore for placement selection , so he selected her for national bank.

Maya went straight to Arjun and asked him all about these and why he lied to her . But Arjun has answer for her every question. At last , Maya warned him that shreya isn’t harmless , be carefull.

Arjun continued on his relation with Shreya….

Maya went on a conference to Paris , on her return she brought her a new iPhone 6 , when she tried to backup by connecting to the laptop , she accidently clicked another Iphone which arjun was having now . she was shocked to see the messages between arjun and someone named Ramkumar  ( It was shreya’s number , Arjun changed the name when Maya suspected him ) .she was diagnosed with Ebola the next day………

What happens to Maya after that ?
Did Arjun felt guilty for his mistake ?
What happened to shreya ?

Read the book to know about the rest of the story....

The story plot revolves around the banker and famous author who was happy with his family . A girl who want to be a famous author comes in his life . How his life changed after that. Is it good for a wife to believe in his husband blindly ....

The book with a total of 388 pages was worth reading.

I am reviewing ‘The Bestseller She Wrote’ by Ravi Subramanian as a part of the biggestBook Review Program for Indian Bloggers. Participate now to get free books!

Posted by Sharanya palanisshami at 5:24 PM No comments:

This Bahrain baba ghanoush goes well with the Bahraini bread – Khubz . This smoked aubergine dip is so delicious.we had this dip with the khubz.
The Arabic preparation is either the eggplant to be baked or broiled  over an open flame. So the pulp is soft and had a smoky taste. 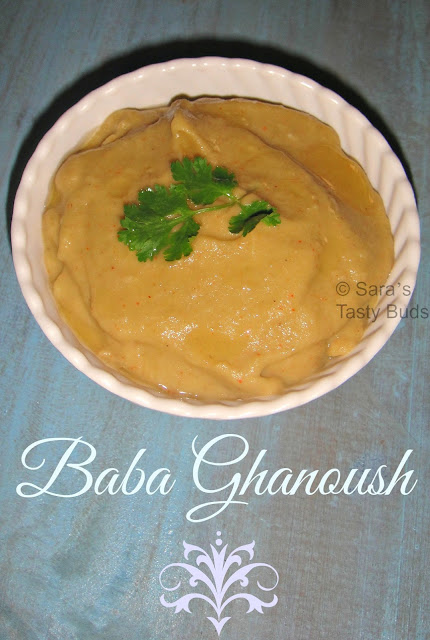 I applied little oil on the eggplant and broiled on direct flame , for 5 – 10 minutes or till the skin blackens.
If you want to bake in oven preheat  to 200* C and place the eggplant on the baking tray and bake for an hour or until the skin is crisp and inside is soft.
When the eggplant cools , remove the skin and chop the flesh.
Add this flesh to the food processor along with the tahini , salt , paprika , lemon juice and yogurt.
Puree till soft and creamy.
Spoon into serving dish  and place a parsley and drizzle olive oil.
Serve with khubz or vegetables.

Posted by Sharanya palanisshami at 10:48 PM No comments:

Email ThisBlogThis!Share to TwitterShare to FacebookShare to Pinterest
Labels: Around the World, Asia, Bahraini cuisine, DIP

This is the famous dessert of Bahrain. Halwa is usually serve along with coffee . Sales of Halwa peak during the three days of Eid after the month of Ramadan.
This halwa is also the same corn flour  / Karachi halwa what we make in India. Addition of the saffron  , nutmeg and sesame seeds are the variation. 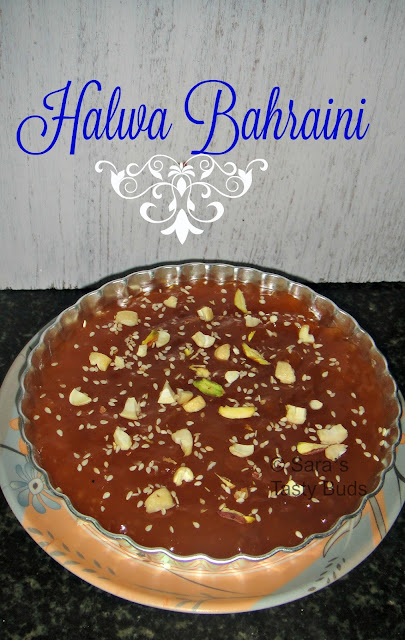 
Pour the halwa into serving dish and sprinkle nuts and sesame seeds on top.
Posted by Sharanya palanisshami at 10:28 PM 2 comments: