Event : Ssshhh cooking secretly
Members of the Facebook  group will be partnered with each of the member every month. They will give two secret ingredients to their partner and the person has to cook with the secret ingredient according to the theme chosen. The picture of the recipe can be posted in the facebook group and the other members can guess the secret ingredient. The The recipe has to be posted at the end of the month .

For this month's ssshhhh secretly cooking the theme  was Millets. I was paired with Renu Agarwal Dongre of cook with Renu. Her blog has a wide variety of dishes and I like her Kid's Lunchbox recipes .....

Foxtail millet is the second most widely planted species of millet and the most grown millet species in Asia. In tamil Foxtail millet is known as Thinai. It has been a staple diet among people for a long time from the sangam period. It is referred to often in old Tamil texts and is commonly assocaited with Lord Muruga . It is a famous offering to Lord Muruga  during Pankuni Uthiram and Kandha Shasti as Thaenum Thinai mavvum meaning honey and foxtail millet flour.
Foxtail millet is rich in fiber and is a good option for weight loss and diabetics.
I made foxtail millet Vangibath . It is same as the vangibath , used foxtail millet instead of normal rice. 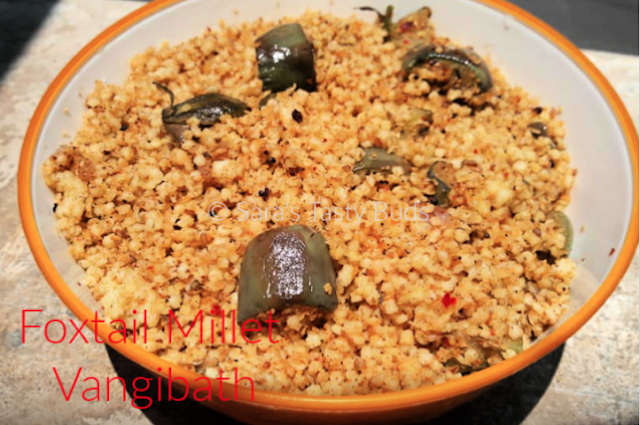 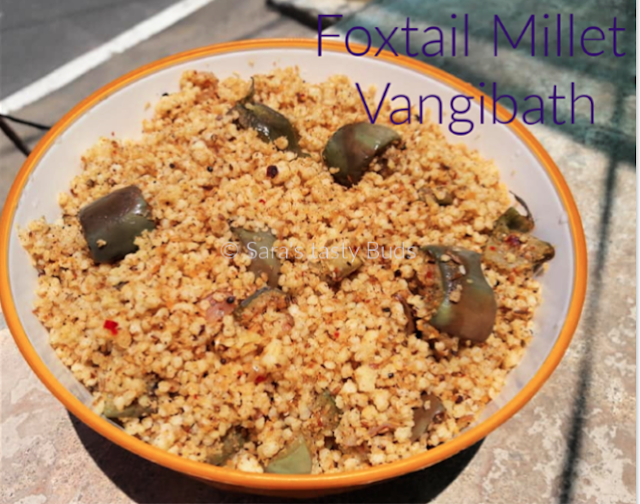 I didn't add tamarind paste , if you want to add can add it while the brinjal is cooking.

Peanuts can be added while tempering it gives a crunch while eating.
Lemon Juice can be added after switching off the flame.


Posted by Sharanya palanisshami at 6:00 PM 13 comments: Links to this post

The National Empanada Day is to be celebrated on April 8 th in the USA .  We a group of bloggers in the facebook group Foodie Extravaganza are having an Empananda Party.

An  empanada is a type of baked or fried turnover consisting of pastry and filling , common in Mediterranean , Latin American and Filipino cultures. The name empanada comes from the Spanish verb empanar , and literally translates as " enbreaded " , that is wrapped or coated in bread.

The  empanada are made by folding dough over a filling, which may consist of meat , cheese , corn or other ingredients and then cooking the resulting turnover , either by baking or frying. They resemble turnovers from many other cuisines and cultures including the pastry from the British Isles , the samsa from central Asia and Samosa or pedakiya from the Indian subcontinent , or the Pirozhki from Russia.

Empanadas trace back their origins to the northwest region of Spain , Galicia . A cookbook published in Catalan in 1520 , Libre del Coch by Robert de Nola , mentions empanadas filled with seafood in the recipes for Catalan , Italian , French and Arabian food.

These empanada resembles the famous Indian sweet dish Somas ( Tamil Name ) / Gujiya  in its shape and method of preparation but differs in its filling. A gujiya or a pedakiya is a sweet deep- fried dumpling , native to the Indian subcontinent. It is made with semolina or all purpose flour stuffed with a mixture of sweetened milk solids and dried fruits. The earliest mention of gujiya dates back to 13th century , when a jaggery - honey mixture was covered with wheat flour and was sun - dried.

I decided to make the Indian spiced empanadas . The filling is spiced with the Indian aromatic spices filled inside the empanadas and deep fried......
I had used green peas and Soy Chunks ( Texturized vegetable Protein ) for the filling . 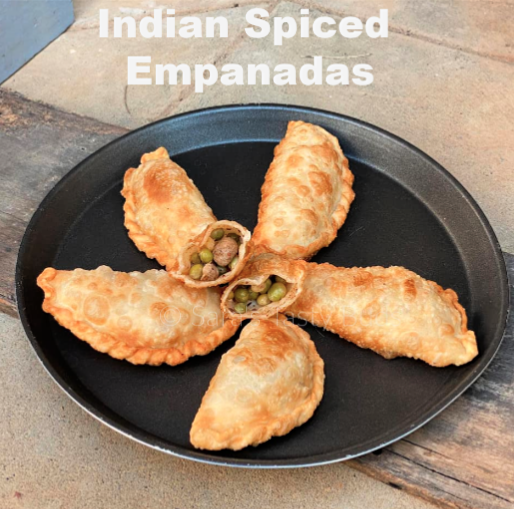 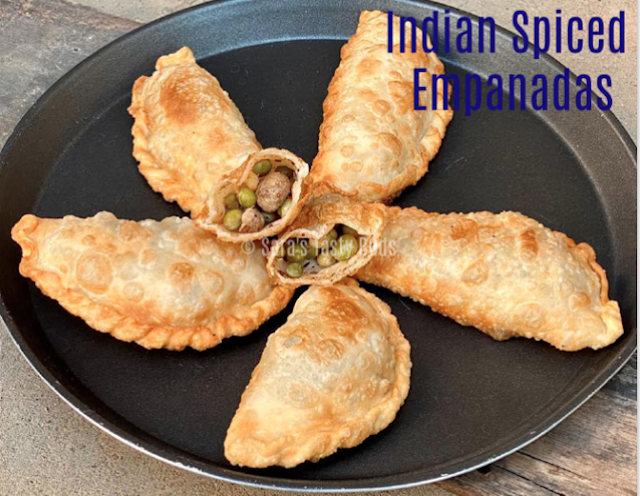 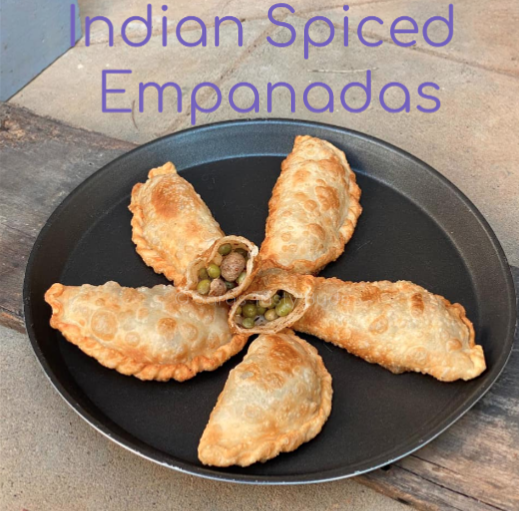 Indian spiced Empanadas are ready to be served.

Foodie Extravaganza is where we celebrate obscure food holidays by cooking and baking together with the same ingredient or theme each month.

Posting day is always the first Wednesday of each month. If you are a blogger and would like to join our group and blog along with us, come join our Facebook page Foodie Extravaganza. We would love to have you! If you're a spectator looking for delicious tid-bits check out our Foodie Extravaganza Pinterest Board!

Posted by Sharanya palanisshami at 9:30 AM 4 comments: Links to this post