This month bread for we knead to bake is   a savoury Tibetan yeasted bread called Tingmos or Ting Momos. This was a steam cooked bread instead of usual baked one . If you’ve never heard of Tingmos before, they’re a steamed bread that is usually used by Tibetans to soak up everything from soup to curries and even spicy pickles/ sauces. 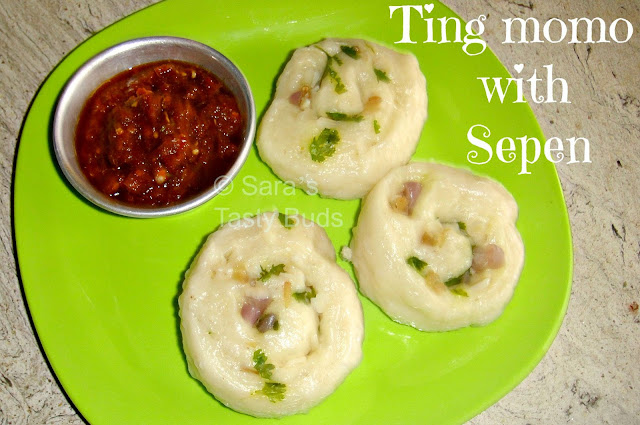 The Tingmo is a sort of a cousin to the Chinese steamed buns and is also popular in the Indian state of Sikkim whch has a geographical border with Tibet. Of course, you can also generally find it on the menu along with Momos, at most Tibetan eateries all over India. 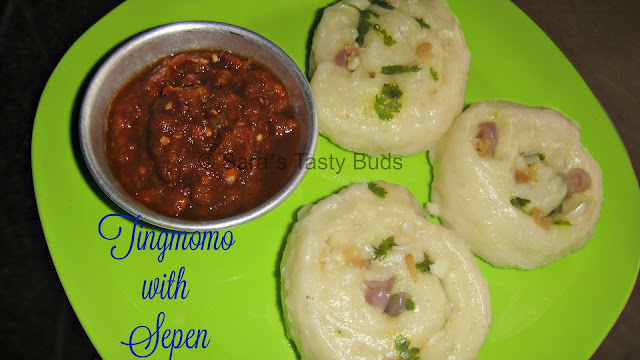 I should think the traditional version of this bread actually doesn’t use yeast but only baking powder as a leavening agent.  This recipe is adapted from Rick Stein’s cookbook titled “India”, he describes Tingmos as “spongy, slightly gelatinous little steamed Tibetan buns, pleasingly savoury with ginger, garlic, coriander and tomato. They’re addictive when dunked into a rich curry or the very yummy Tibetan red chilli sauce”- sepen.


This little bun is made and eaten in Tibet usually at breakfast with a rice porridge called dreythuk. They’re quite popular though with a very spicy red chilly dipping sauce called Sepen. They can also be served with soups or “curries”.
So when made and cooked properly, Tingmos should be soft, fluffy and slightly chewy. There are two types of Tingmos, from what I been able to figure out – one that’s plain and one with a little filling.
I made both plain and stuffed. There are different ways of shaping Tingmos, and I’ve used an easy method.

Here’s a useful video that shows Tingmos being made. (http://www.youtube.com/watch?v=v8OxkgWIV9E&feature=player_embedded )

Method:
To make the dough, combine the flour, baking powder, yeast and salt in a large bowl and make a well in the middle.
Add enough of the warm water (and flour if necessary) and knead to make a soft and smooth but not sticky dough.  Knead for 1 to 2 minutes in the bowl and then cover and set aside for about 45 minutes to an hour until it rises to almost double in size. You can also make the dough by machine.
Mix the ingredients under filling together.

Turn the risen dough onto a lightly floured surface, and divide into two pieces. Roll each piece into a rough rectangle (this makes rolling up easier) about 5mm thick. Brush half the ginger-garlic paste across the surface. Mix the salt with the spring onions ( shallots ) and sprinkle half of it over this. 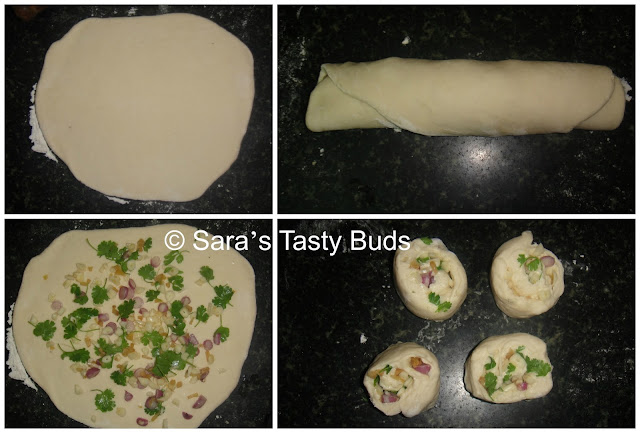 Roll up the dough fairly tightly, from the long side as you would a Swiss roll, then cut it into 6 or 7 slices about 3 to 4mm thick.  I made the  remaining half of the dough as plain tingmo without filling. For the shape of plain tingmo , refer here. 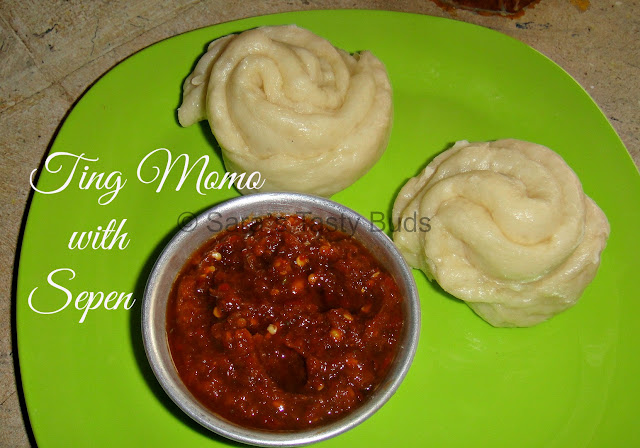 Lightly oil a steamer and place the rolls upright in the steamer (so the cut sides face up/ down) leaving about 2 to 3 inches space in between as they will expand on steaming. Loosely cover and let it sit at room temperature for about 15 minutes. In the meanwhile, get the water in your steamer boiling.
Steam the Tingmos over simmering water, covered, for about 15 to 20 minutes  until they’re puffy, firm and cooked. Serve warm.
This recipe makes about 12 to 15 Tingmos. Double the recipe for a larger batch. 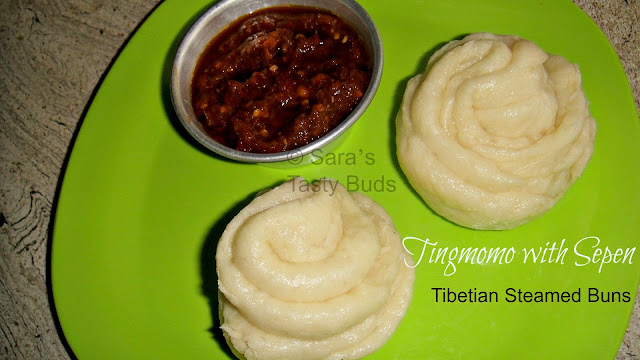 
Spicy raw sauce made as a sidedish , goes well with tingmo. Check here. 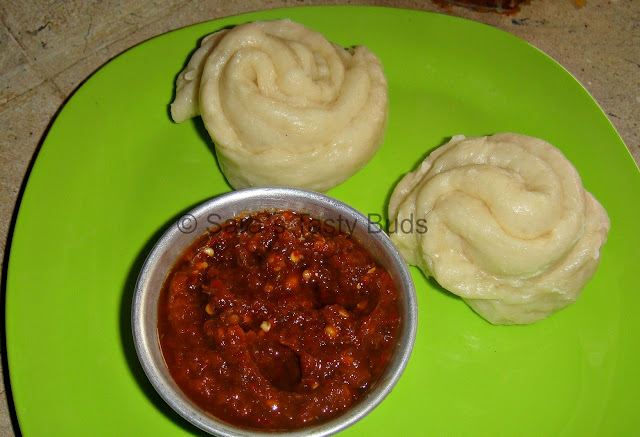 Posted by Sharanya palanisshami at 11:49 PM