This was my first post in this Shhh secretly cooking . Mayuri patel mailed me whether I am interested in joining , I immediately said Yes .

Pallavi purani  was paired with me  for this March. She gave me two secret ingredients – Maize and Cardamom. 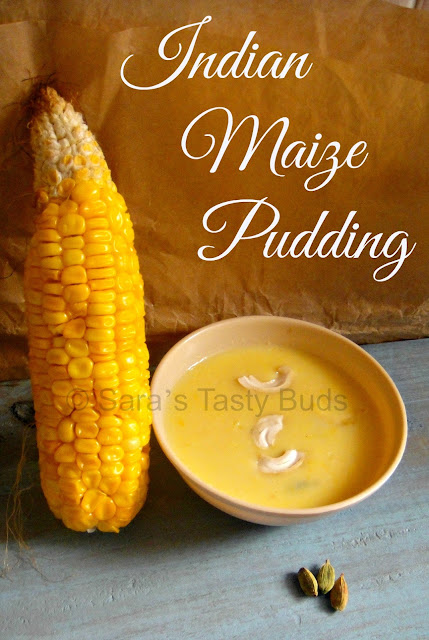 The term maize derives from the Spanish form of the indigenous Taino word maiz for the plant. It is called as Maize in united kingdom and Ireland , where it is called now as sweet corn.

We usually buy the maize as a whole – corn on cob and steam cook and have it. It is a common snack in our home.
Dried corn has the antioxidant activity , which reduce the chance of heart disease and cancer . Dried corn is a good source of many nutrients like thiamine ( Vitamin B1) , Pantothenic acid (Vitamin B5 ) , folate , dietary fiber , phosphorous and manganese . Its effect in heart health lies not just in its fiber , but in the significant amounts of folate that corn supplies .

I thought of making some other recipe and bought dry corn but finally made the  payasam with the fresh corn.

I boiled the whole corn with the cob and shreeded the corn .

Dry roast the cardamom and grind into fine powder.

I shreeded the corn from the whole boiled corn cob. Then grind the corn with little milk to a fine paste.

Melt the Ghee in a pan , add the grounded corn and sauté for two minutes .

Add in the milk and let it boil on the medium flame.

After around 15 minutes of boiling , add the sugar and simmer for another 10 minutes.

Add in the cardamom powder and cashew and mix well.

Note :
I didn’t add any other flavouring other cardamom  , if you wish to add can add rose water.

The payasam was so flavourful and tasty.

Posted by Sharanya palanisshami at 4:40 PM